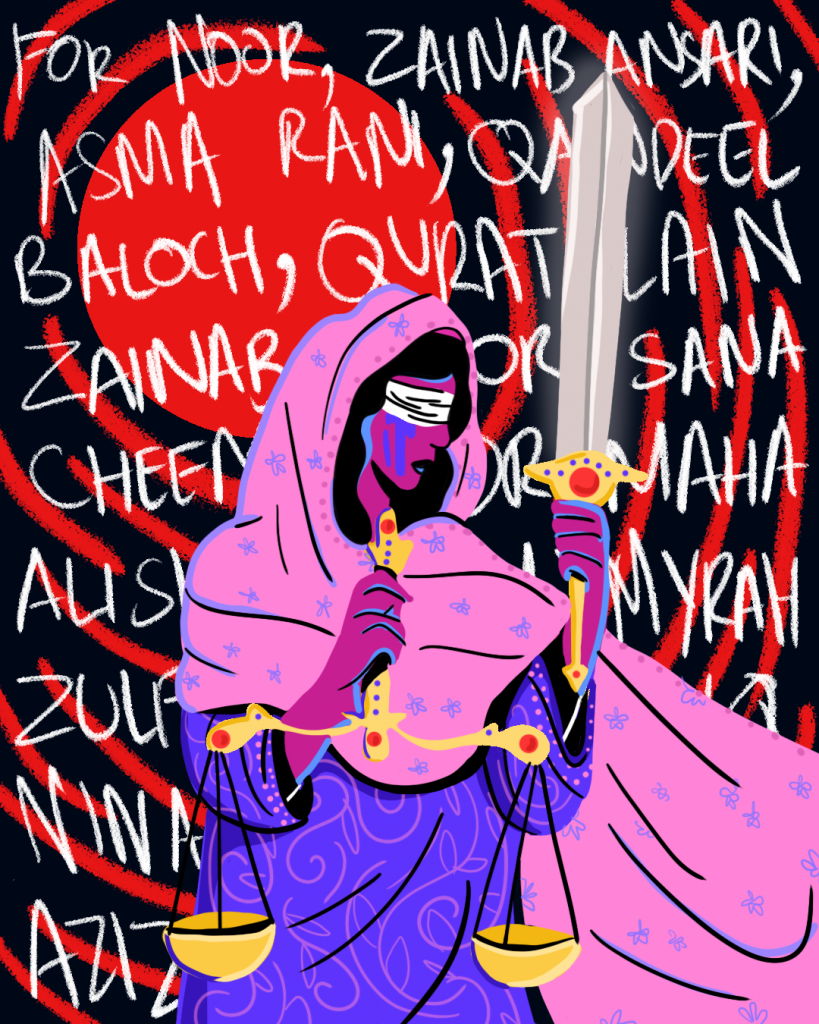 TW: Mentions of harassment and violence against women

Three days after Noor Mukadam’s case broke out in the media my mother sat me down and said that if a man ever harassed me in public, I was to keep quiet and move on because we never know what men are capable of. What frustrated me was not the statement but how easily I accepted it. Gone was the raging sixteen year old who would have argued: “No. Men like this need to be put in their place.” I don’t know when it started, but my anger was seeping out and fear was crawling in.

It was this moment of realisation which compelled me to explore how we, as women, are made to unfairly hold our rage in or abandon it in fear. From this exploration rises the need to reclaim our anger as a powerful agent of change and self-expression.

Many of us bite back our anger in fear. Rida Arif ‘23 explains, “In your head you think that if you ever get harassed, you will do this and say that…But when it actually happens, in that moment you just freeze. And sometimes that is subconscious but more often it’s very conscious. It’s rooted in fear. If I react I could get kidnapped or hurt.” At a time when cases of femicide are occurring for the most trivial of reasons, this reaction is understood by most.

Living with this constant fear, we have learnt to make ourselves smaller. Zoha Ahmed ‘23 shares an incident of being in a public space, “My immediate reaction was to shrink myself so that no guy looks at me, so that nothing bad happens. This was a pivotal moment for me where I thought why did this happen? And it’s just because I was scared.”

Not only do we constantly hold our anger in, but we also absorb the anger of men. Ahmed elaborates how women are trained to become the silent sponges of man’s temper from a very early age; “Abu agar kuch bol rahein hai toh chup kar jana hai. No matter how irrational he is, he’s a man and it’s okay. We just have to stay quiet.”

From there it only grows, as we are expected to absolve the very men who give us reasons to rage. Shiza Haq ‘22 recalls speaking out angrily against sexual harassment at LUMS only to be told: “It’s not that big of a deal. You need to be more forgiving.” This is but a more cushioned way to say men will be men and you just have to deal with it.

Those brave and privileged enough to safely express anger find themselves being snuffed out by ridicule and mockery. All four women I talked to had faced this degrading treatment. Izma Qazi ‘22 cites women in the public eye being relegated to memes for daring to express the same emotion male politicians are applauded for. Haq remembers being repetitively told that she is overreacting. Similarly, Ahmed remembers being disregarded for being “too emotional for no reason.” And Arif narrates an incident of screaming at a reporter manipulating young women at this year’s Aurat March while he continued to smile and jeer back at her.

This phenomenon of painting women as oversensitive, raging, and mad women for expressing justified anger is inescapable even within LUMS. How often have we heard our male and female peers term feminists asking for their due rights as radical feminists and women demanding more as gender extremists. Like Arif points out, “Women are made to be villains when they are vocal.”

Arif is also quick to point out how anti-feminist men weaponise women’s anger to undermine their struggles. “It’s just so difficult to want to make a change and do something when no one will take you seriously and will belittle you,” she says.

Yet, the loud retaliation to the recent wave of femicide and harassment cases has proven women’s resilience in their ability to express infuriation.

Growing up with female brutalisation as a norm, most of us, like Ahmed, are used to this emotion; “I feel like I’ve been angry my whole life. I don’t remember feeling otherwise after I hit puberty.”

This is a fury fueled by a collective mourning for the women we lost, disillusionment for the state and society we live in, and sometimes just sadness. Arif explains,“I am so beyond the point of living here [in Pakistan]. I am so done. Clearly, no one cares about us.”

Sometimes our outrage is masked by desensitisation. For Ahmed, it took two days to feel anything after the Noor case because she had been dealing with story after story of gender-based violence. Other times, our anger carries a deep despair which settles in after the rage has washed away. On advocating for women for years, Qazi says “Before the anger sets in, you do try everything else. Then you get angry and that’s your last resort; when even that doesn’t work then there’s just hopelessness.”

In face of all this pain, why is it still important for women to express their anger?

Displays of justified rage signify that we will take no more. It is our simplest way to protest when we are not able to be part of physical protest spaces (due to parental restrictions or other reasons). For Arif it is equivalent to saying, “I am not going to just sit here and accept that this is a man’s world.”

We are always equipped with our anger, the mere expression of which is to object to societal norms that restrict us. Like Qazi says, “As women, we are constantly told that there is a proper way to behave: ghussa nahi karna chahiye.”

For Ahmed, her anger becomes a channel for collective activism. Her past, present, and future is embedded in this shared struggle through her work with the Progressive Students Collective, FemSoc, and the Women Democratic Front. She claims, “I am part of groups of women who feel just as angry, and we can do something about it.”

Haq sees anger as the only way forward. She says, “I think it’s offensive how people say that cases like Noor’s are a one-time occurrence. I think cases like this happen every day in Pakistan. It’s just that high profile ones get attention. Until our laws and courts are able to protect us, everyone needs to stay angry, especially women.”

Qazi emphasises that this outpour is a way to self therapise, “If you keep your anger in then you’ll never be able to understand why you’re angry. You [will] start to feel invalid.”

Moreover, Arif believes that in a society where our anger is stigmatised, collective and unapologetic displays of rage hold power. “I think our anger is so important. It is what will bring change…I feel powerful and part of this collective rage. And we made a change. We can’t stop now.”

Public outcry over the recent cases has resulted in protests calling for government action against the criminals and the enacting of safer policies for women, as well as vigils, across the major cities of Pakistan and among the Pakistani diaspora. During this time, the #endfemicide campaign also erupted over social media.

A woman’s anger is a justified emotion expressed whenever we do not get the treatment we are entitled to as human beings. It gives us support in a society set to rob us of our rage from the moment we are born; it is a protest against the patriarchy that bars us from the public space. For me, anger is a way to overcome my fear, to find a voice again, and not succumb to a culture of silence. Nonetheless, the danger of expressing this emotion cannot be ignored. Women need women-only safe spaces, support groups, dialogues, and other forms of expression like open mics to explore and reclaim our emotions.